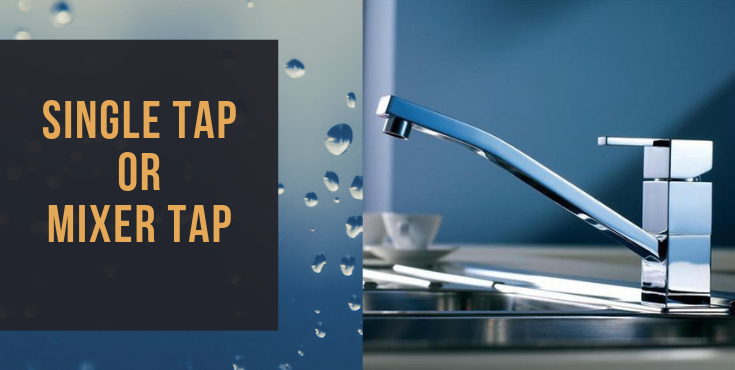 Nowadays, different kinds of taps are available to deliver water to bathtubs, basins and sinks. There exist major two tap styles and they are single tap and mixer tap. Well, each of the tap styles delivers water in the right way but in its own distinctive style. Let’s understand the major difference between the two tap styles in some detail:

One of the main advantages of using a single lever tap is you can leave the tap lever in your preferred position once you have figured out a water temperature that works fine for you. Moreover, it’s handy to control the water flow, the higher you lift the lever the stronger will be the water flow. Compared to mixers, the installation of single taps requires more hook-ups.

Mixer taps have both the cold water and hot water controls in a lever fitted on the tap. To obtain the desired water temperature that best suits your needs, all you have to do is move the lever back and forth – the hot water and the cold water come out of the same spout in mixer taps. Normally, mixer taps are operated using one or more levers; however, they can also be controlled using the conventional taps that you can turn on and turn off. Mixer tap variants include 3-hole mixer taps wherein the taps are separate and have one spout and monobloc mixer taps wherein everything is placed on one main tap body.

These days, bathroom mixer taps come integrated with thermostats, which is wonderful, as you can set the temperature as per your preference and it will turn on to that temperature every time you use it – this is particularly good for baths and showers. And as the water is set to an optimal temperature, it will come out faster, which aid in saving precious water as you’ll only use needed water.

For the bathtub, shower and basin, as well as, for the kitchen sink, mixer taps are ideal. Available with water saving functions to enhance your water efficiency, mixer taps come in a wide range of designs and colours. The most popular materials are stainless steel and chrome as they beautifully gel with any type of decor and emit an ageless look. Mixer taps are handy and can be used by all family members with the utmost ease. Moreover, the installation of the mixer tap is less complicated compared to single taps.

How to Determine the Right Tap Style for Your Needs

Nonetheless, if you’re beginning fresh, you can pick the sinks, bathtubs or basins first and then purchase the matching taps. Conversely, another consideration for buying taps exist – here you’ll find variants of tubs that gel with wall models of sinks, basins and taps effortlessly, which demand the counter installation of taps. Yet there is another option as well and that’s the height of the taps; for instance, some tap variants stand higher above the sink, basins and tubs compared to other tap models having normal height.

Established retail, as well as, online stores stock an array of both single taps and mixer taps from top brands such as Dorf, Caroma, Methven, Abey, Bastow and more. Taps are available in various materials, colours and finishes.